“Namaaz is the first molecular gastronomy restaurant in Indonesia which serve Indonesian food as its signature dishes.” —namaazdining.com

So this is my second time trying out this one of a kind restaurant, and this time, it’s their 3rd season! 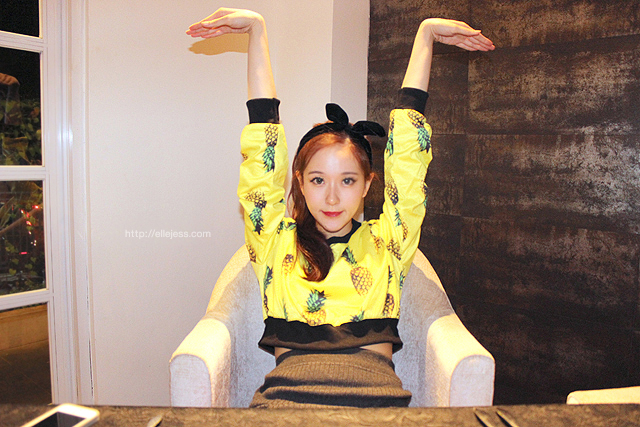 I had a chance to try out their 2nd season on 14 June 2013. Wrote a short Instareview about it here:

All in all, the whole course was delightful to our eyes, taste buds and minds. One dish is more surprising than the next. My family and I certainly had a pleasant and unforgettable dinner experience!” —http://instagram.com/p/anq-E8qxtW/

The first time I went there, this restaurant was addressed at a small hidden place, on the second floor of another small restaurant at Fatmawati, South Jakarta area. Today, you can find this restaurant at a much more convenient location:
Jl. Gunawarman no.42, Kebayoran Baru, Jakarta Selatan 12110 | ph. +6221 33061000 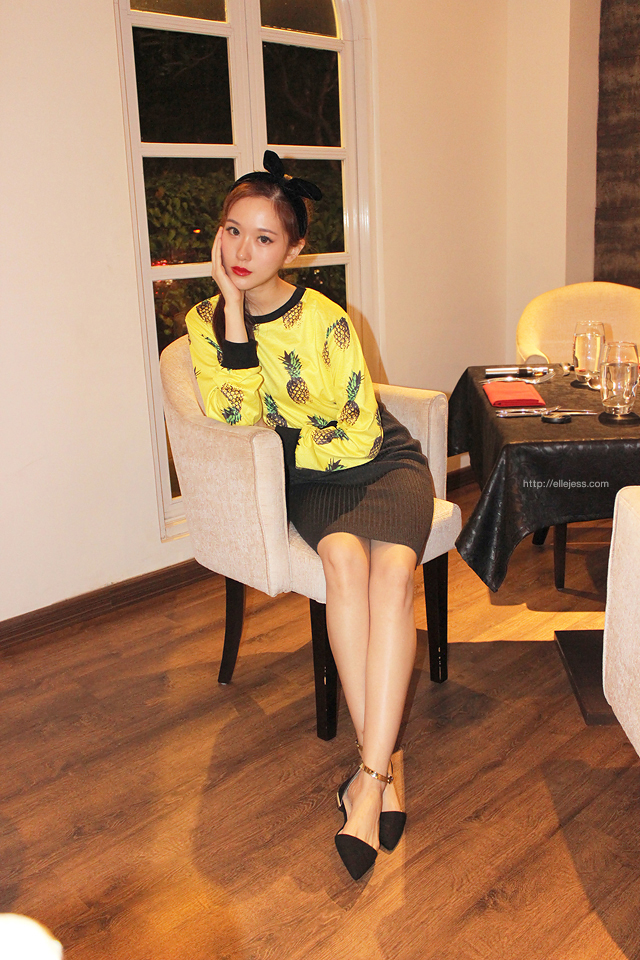 Alright, are you up to THE exciting 17 courses food adventure??
Ready…….
Set…………………………
OK before we go (stop sighing, this is for your own good lol), allow me to remind you that here in Namaaz Dining, “What you see is NOT what you get”. Guests were not given the menu list either as to avoid spoiling the fun. So before you scroll on, I’m warning you that this post is ALL about the spoiler lol. If you’re fine with it, then brace yourself and let’s GO! ≡≡≡┌( ≧▽≦)┘ 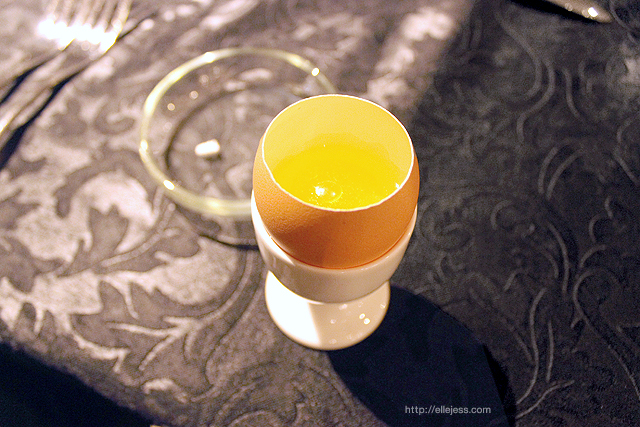 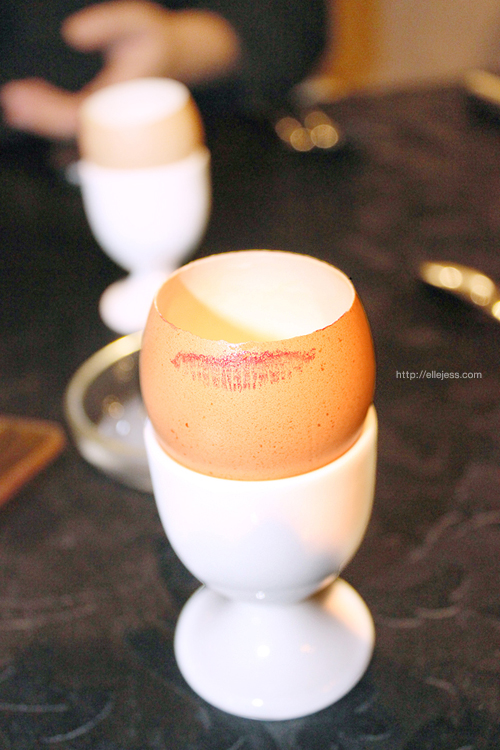 Right here we got something that looked like… a raw egg with a mini pill beside it?
“Diminum telurnya sambil dimakan pilnya (at the same time, drink the egg and eat the pill),” Chef Andrian said and so we did. The ‘egg yolk’ didn’t smell or felt like one at all, it was somewhat a sweet and fruity drink, and the pill was somewhat a soda candy. Mixed it together, we got Markisa Soda in our mouth! This sweet and refreshing appetizer marked our very first surprising menu that night. 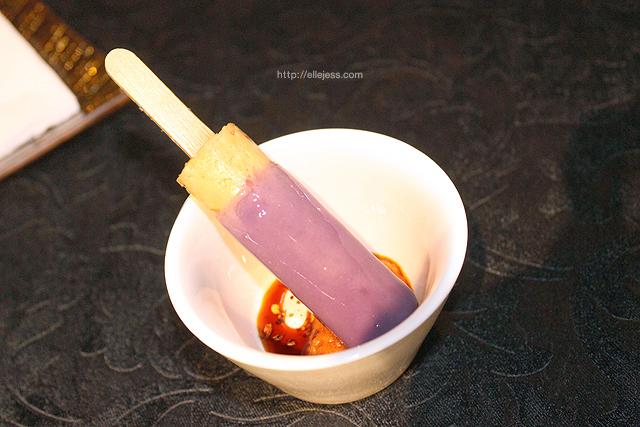 After the sweet surprise, this popsicle (yes, the one I posed with up there) came to our table.
Despite it’s sweet look, it was actually a savory Sate Lilit (Satay)!! It was sooo yummeh. The purple skin was elastic (gelatin, perhaps?) and the yellow thing was an egg. I wouldn’t mind having more of that sauce, though. ;b 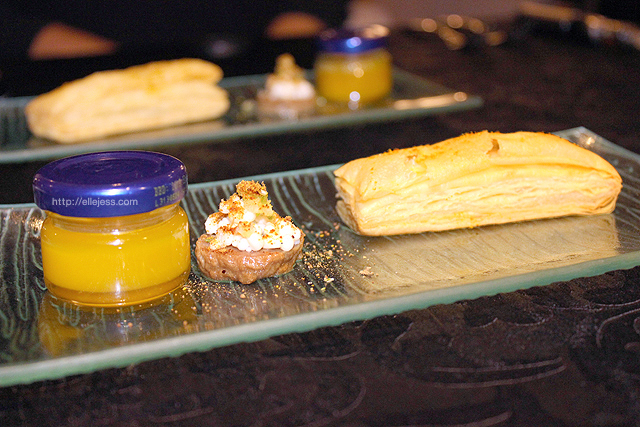 Croissant with orange jam? Nope, it’s a Martabak! *wooooot*
Have you heard or tried a Martabak Telor before? Well, here you have one, ala Namaaz. The orange thingy inside the jar was egg yolk and the white thingy above the beef was ‘egg white caviar’! So, so creative!! 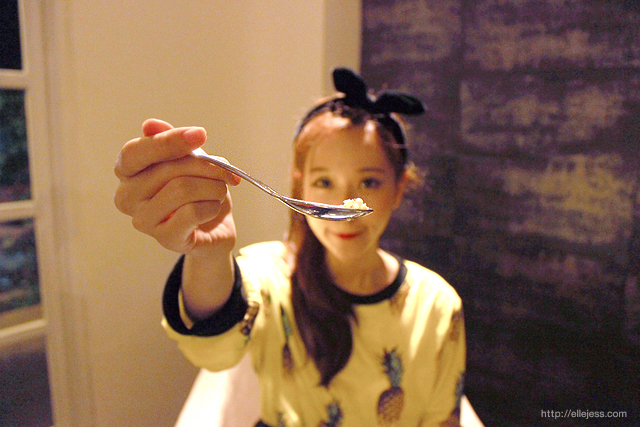 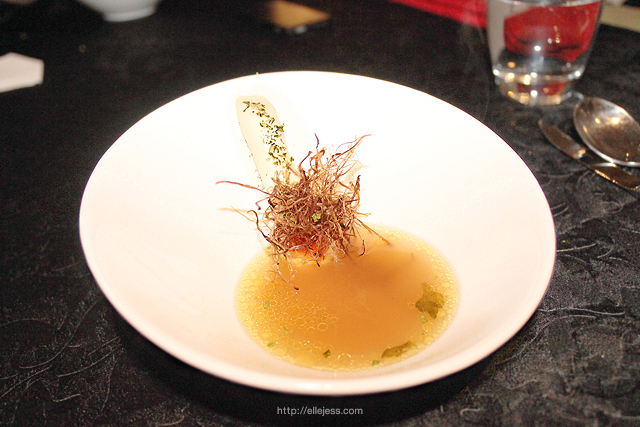 This seemingly abstract dish was actually a Sop Buntut and a very tasty one!
The white paste was the rice and, oh, where’s the meat, you ask. Well, that messy brown thing IS the meat. They cleverly turn it into dried-shredded beef floss (abon)! XD The soup broth was very rich in taste, too. ♡♡♡ 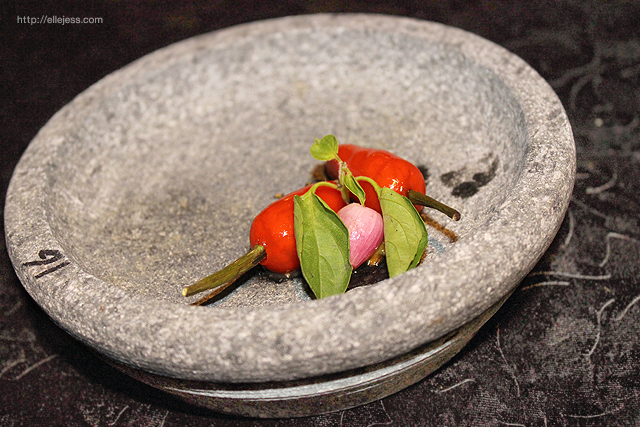 On the email they sent me, this dish was the highlight! It’s called Bebek Cabe Rawit.
…But hey, it’s just an ulekan and some chilies on it. Where’s the duck?? Well, guess what? It was stuffed inside those ‘chilies’! ;D We ate it with the shallot, leaf and the delicious sauce below it. Pretty delicious for an invisible duck! XD 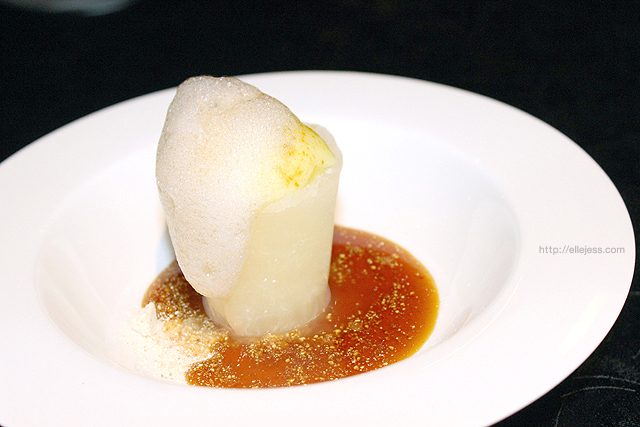 At first I thought this one was Pempek Telur, but turns out it was Rujak!
This one is a veerrrrryyyyyy interesting menu. That cylindrical thing was made of ICE!!! It didn’t make the dish tasted bland, though, I think it’s because the ice was made out of broth, not just plain water. 😀 Anyway, this dish was a very clever, delish and refreshing one. Super love! 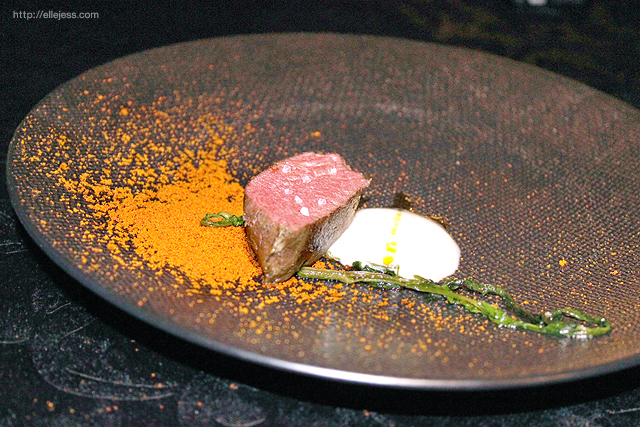 If you like your steak tender, you must love this like I do. Here comes… Steak Rendang!
Cooked in 54°C for two good hours, the meat turned out medium well. It was superbly juicy and tender. The rendang spices and santan made it even more special! 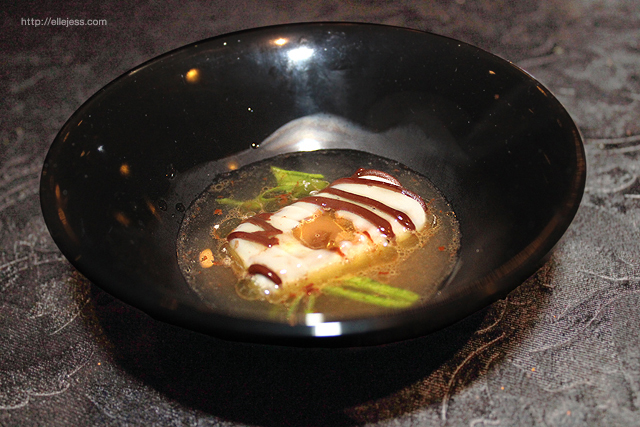 A chocolate inside a soup?? Introducing Tongseng!
And yes, that IS chocolate covering the seasoning inside it. The soup tasted simply hot and plain without it lol. By the way, turns out we CAN eat a savory chocolate. Can you? 😉 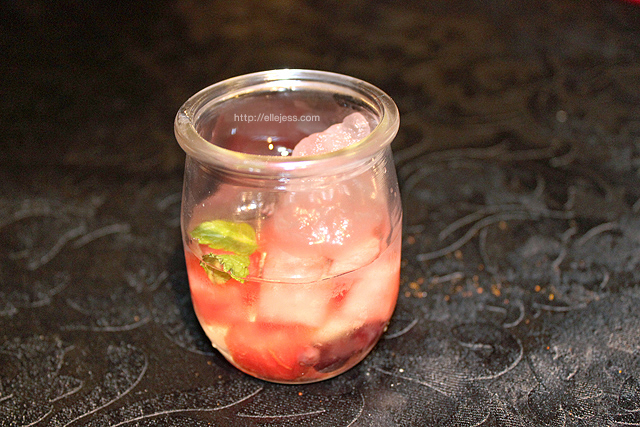 For the ninth course, we had this sweet and refreshing Es Jeruk Nipis that looked like an iced strawberry drink. There was a short break after this dish, the waiters and waitresses paused serving and some guests used this opportunity to excuse themselves to the toilet. 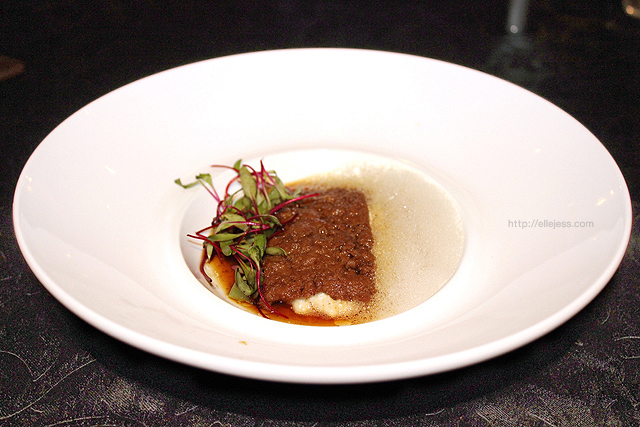 Next, we had Kambing Bacem which was seriously very delicious to me. I LOVE super soft dishes* and this one had porridge(?) below the ground lamb meat and the broth tasted super awesome~~~!!
*I need to chew EVERYTHING (including juices and soup wtf) thoroughly before I swallow it. Mom said it’s because I have a very small throat? Anyway, I appreciate soft foods because it lighten my jaws’ burden lol 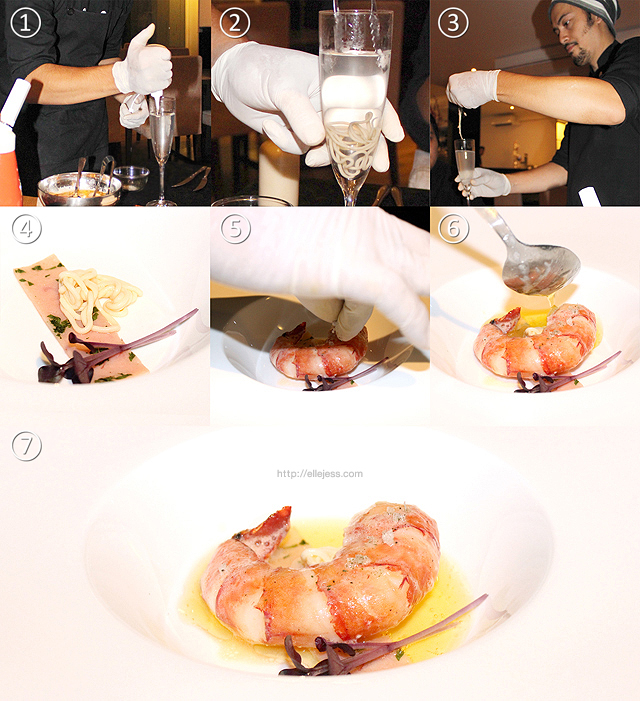 This dish was quite a mystery until step… seven. Ok lah everything here was mysterious until you tried it yourself lolol. Okay, do you know what this is? Yes, it’s an Udang Telor Asin (Prawn with Salted Egg)! 😀 That noodle thing on step 2-4 is the salted egg!! The prawn was fresh and look, there’s a slice of ham, too! Love how pretty and delish this meal was. Not to mention the sophisticated one-by-one prep by the chef himself. ^^b 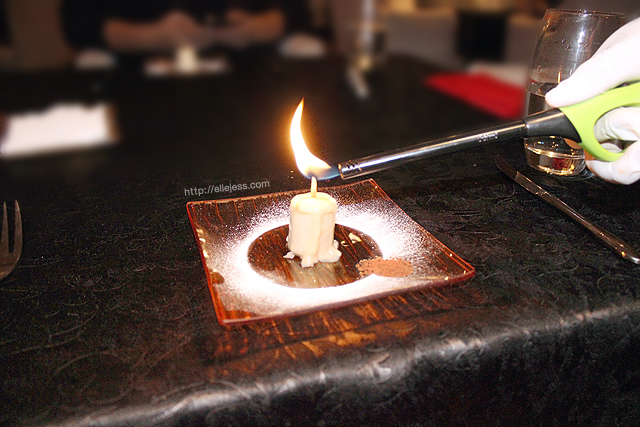 This exciting dish was present on the second season, it looked like a *lighted* candle, yes?
Well, after making a wish (we were asked to! Hahaha) and the light turned off, we took a slice and voila, it’s a Pisang Bakar (Grilled Banana)!! Super creative omg!! Even the ‘candle’s stick’ could be eaten, too, as it was made of nuts. XD 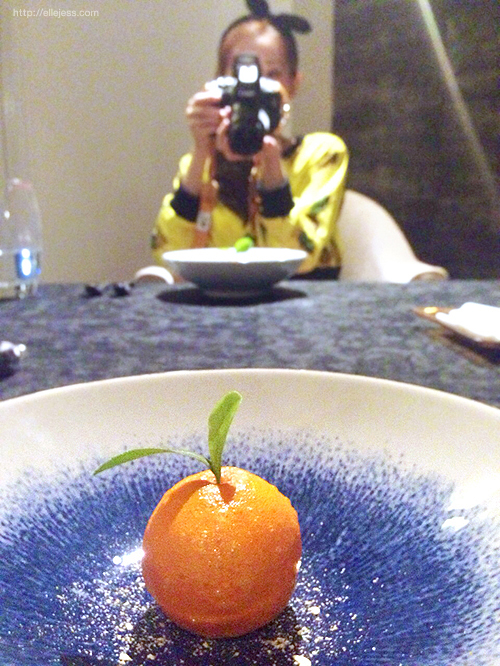 Now, what are you hiding there, lil fella? I know you ain’t an ordinary orange! 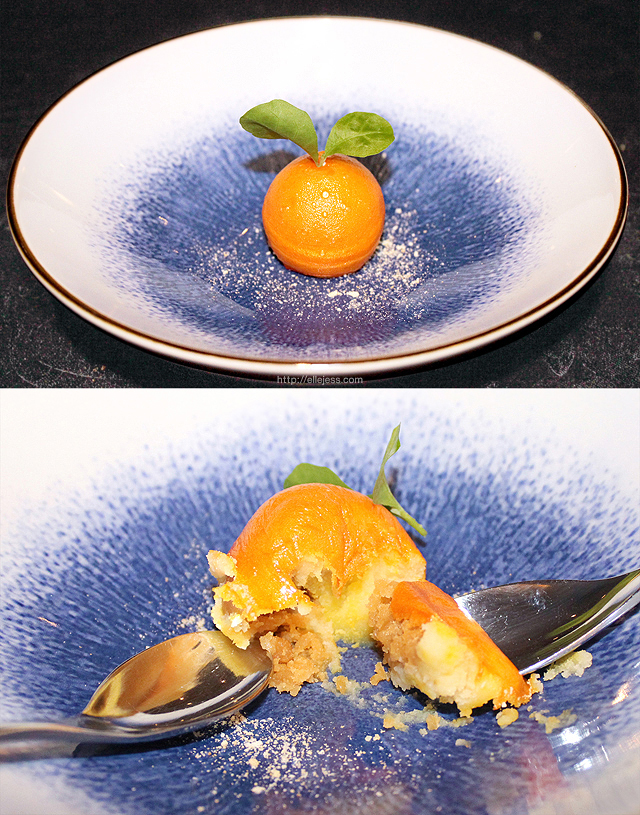 TADAHHH! It’s Kue Keranjang!!!
Sooooooooooooooo LOVE this one to the max!!! First, it’s cute (3cm width omg SO CUTE). Second, the orange peel was elastic fun and it was also made of orange juice. Last but not least, it tasted moderately sweet, sticky (as a Kue Keranjang supposed to be), soft and very, very, very oishiiiiii~~~!!! 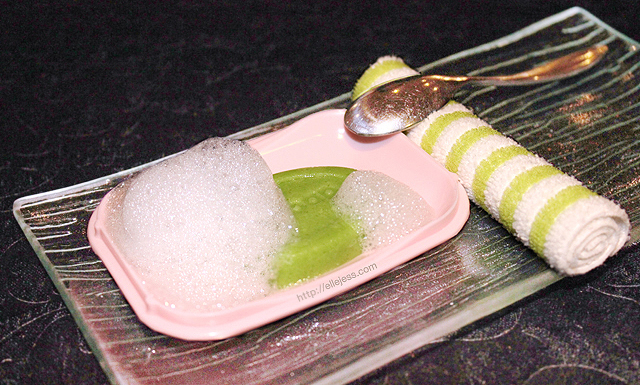 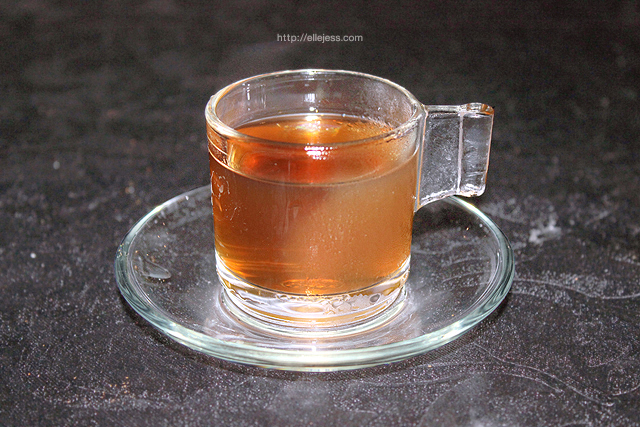 Ladies and gentlemen, lo and behold… Es Teh Panas (Iced Hot Tea)!! Hahahahaha seriously, if you drink the darker side, it was hot and the lighter side was cold! Abracadabra, anyone? (⁕ᵒ̤̑₀̑ᵒ̤̑⁕) 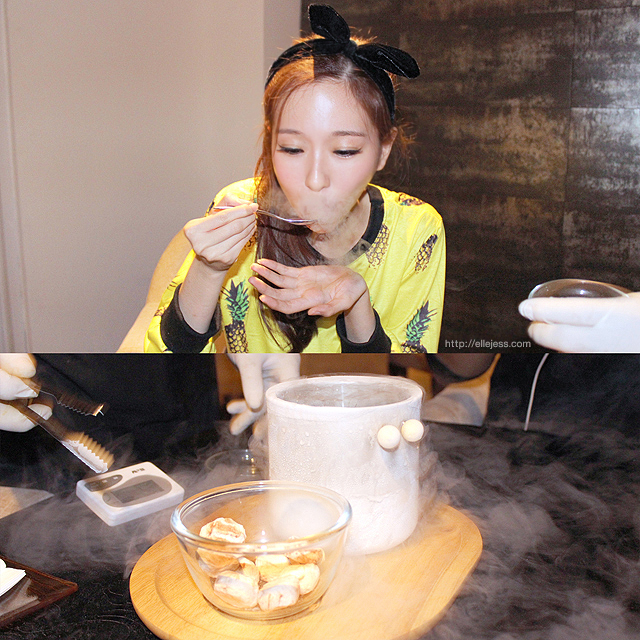 The surprise didn’t stop there, entered Dragon Breath. It was actually a meringue, ‘cooked’ for a few seconds inside a pot filled with Nitrogen. When we eat it, smoke would come out of our mouth. Some even tried to close their mouth and the smoke came out of their nose and ears lol, so funky! 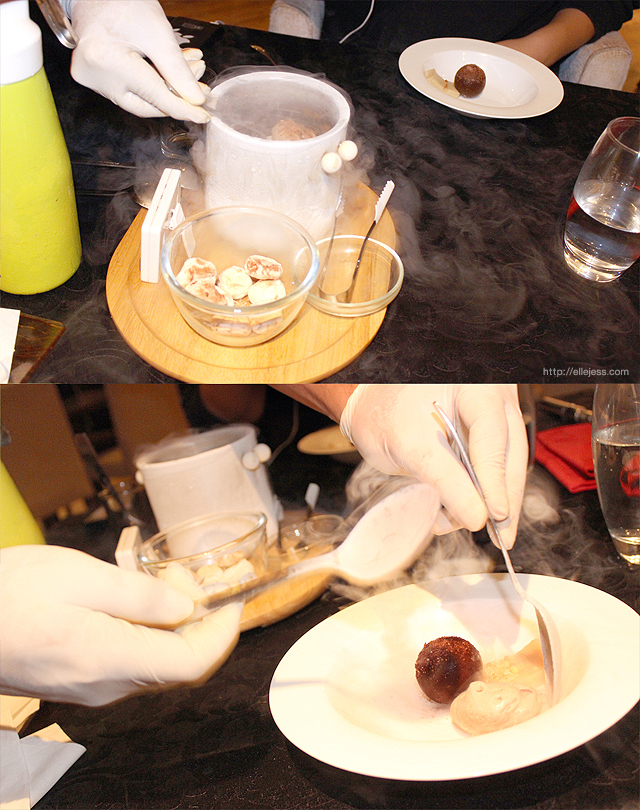 The last sensation was this one in the making… Hmmm, chocolate ball and gelatinous thingy spotted! 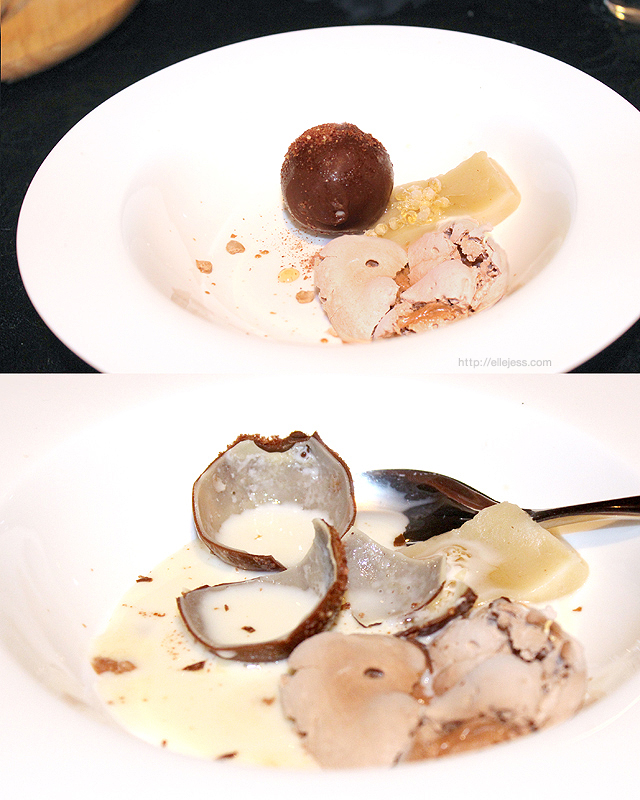 “Crack the chocolate,” said the chef and WHOA! Milk poured out of it in generous amount!
This 17th a.k.a. the closing dish is Es Kacang Merah (Iced Red Bean Dessert). It tasted like modern red bean sweets, very fresh and yummy dessert! 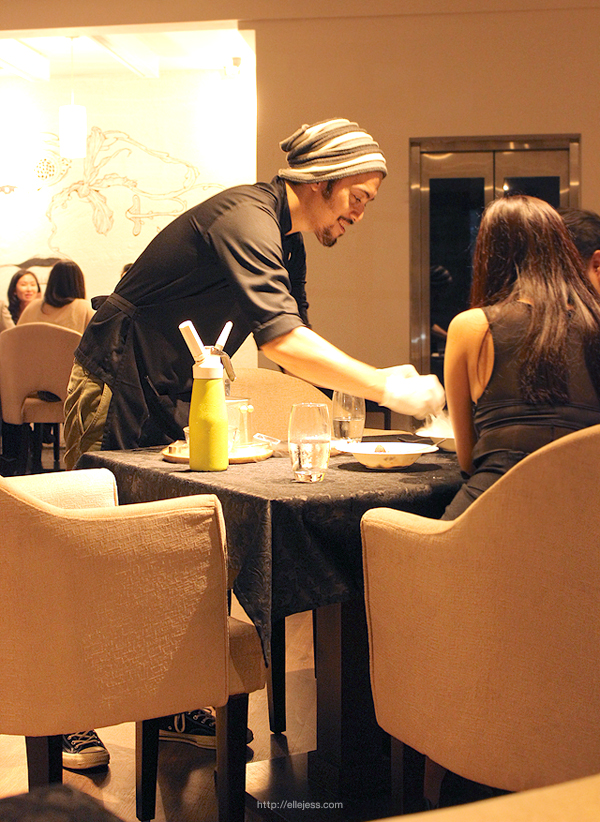 Overall, our 17 course dinner was beyond enjoyable. As Chef Andrian said anyway, Namaaz is all about Fun Dining, not fine dining! ^^ Okay then, thank you so much for reading and see you guys on my next post~ (ˆヮˆ)づ♡
XOXO
Jessica Yamada
Instagram | Twitter | Facebook | Youtube | Google+

How to Wear White Based on Your Mood